Considering a new electric stove or fire, and wondering if it’s right for you? We’ve debunked some of the myths surrounding them to help inform your decision. 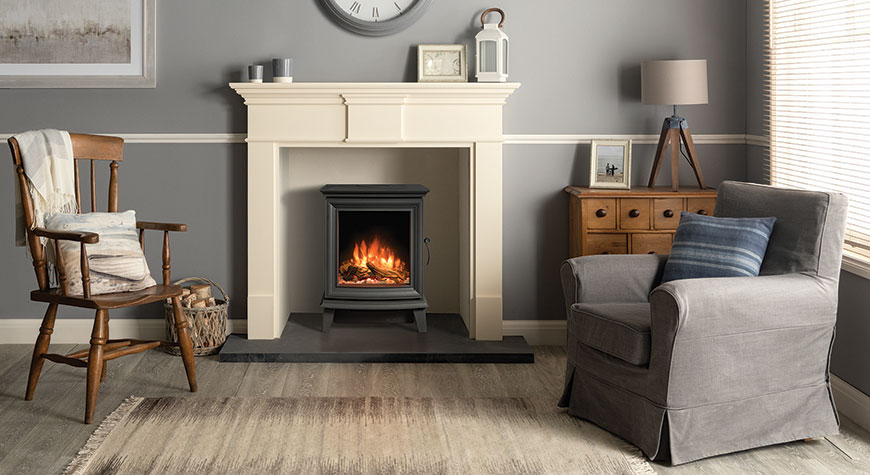 While we recognise that for some, the warm glow of a real log burner is the best way to achieve that cosy fireside appeal, an electric fire has clear benefits. Gazco electric stoves and fires such as the Chesterfield 5 Electric stove utilise the latest flame display technologies to deliver a wonderfully inviting fire display with the convenience of electric.

Some electric fires such as eStudio 135R even feature extras like the optional Mood Lighting Kit that lets you reach new levels of ambience. These LED lighting strips feature 13 different colours, and can be fixed wherever you need a little colour ambience in the room. As they work in tandem with the fire itself, it means you can easily change the atmosphere of your room to suit your vibe by changing the colour of your mood lighting, all from the fire’s remote. Who says you can’t get ambience from an electric fire!

Myth 2: Electric stoves/fires are inefficient or expensive to run 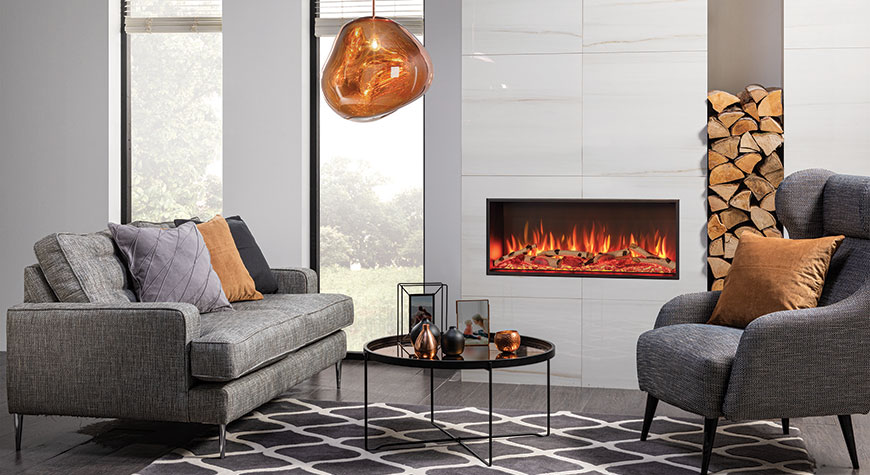 Another one you might hear from time to time is that electric stoves and fires are expensive to run, or aren’t as efficient as other forms of heating. Many of Gazco’s electric stoves and fires have been designed with energy saving features built in which aims to keep running costs down. The main one being of course the ability to turn off the heater independently of the flame display. This is a useful feature for those who want a highly versatile designer centrepiece which can be used all year round, something which simply isn’t possible with a gas or solid fuel fire.

Even better, many Gazco stoves and fires such as the Sheraton 5 Electric or eStudio 105R are available with a Programmable Thermostatic Eco remote control. This allows the heater to switch on or off automatically, in order to maintain your desired room temperature. The open window detection feature will pause heat output if it detects a sudden drop in temperature such as when a window is opened. The final thing to consider is the ease of electric and the lack of servicing costs for an electric appliance. Many Gazco electric stoves and fires are simply plug and play, requiring nothing more than an electric socket to get up and running – no flue or chimney needed at all! 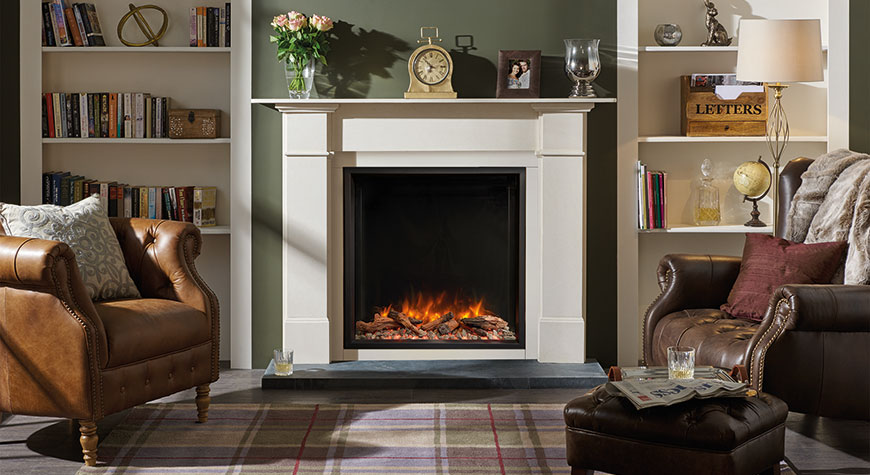 With advanced Chromalight® LED technology and highly authentic fuel effects, Gazco electric fires such as the eReflex 70R and the eStudio range are some of most realistic we’ve ever created. Many of our electric stoves are made using the same high-quality metals as that of their solid fuel variants, with the main difference being on the inside – advanced Chromalight LED systems. With multiple flame effects to choose from and enchanting ember bed up-lighting, you’ll be in awe of the level of ambience and fireside appeal that these electric stoves and fires can offer.

For more ideas on how to style your home with an electric stove, see our other blog post.

Myth 4: Electric stoves/fires are a hassle to install and service 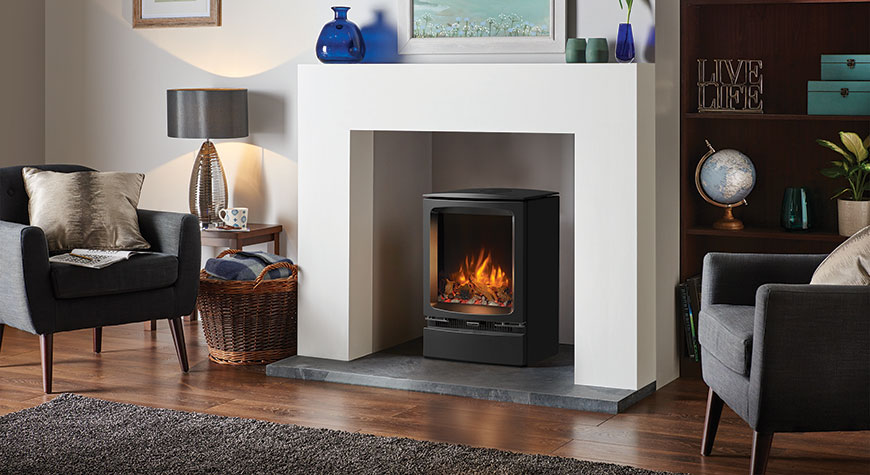 Actually, you probably don’t hear this one that often. The reason being that electric appliances, particularly electric stoves such as the Gazco Vogue Midi are plug and play and don’t require a qualified installer to get up and running. By virtue of their design, inset electric fires usually require a faux wall to be built such as the case with a media wall, but actually installing the fire is usually very straightforward. What’s more, besides cleaning and dusting every so often there are no servicing requirements for an electric stove or fire.

For more information on media walls, see our other blog post.

Myth 5: Electric stoves/fires can’t be installed in sheds or outbuildings 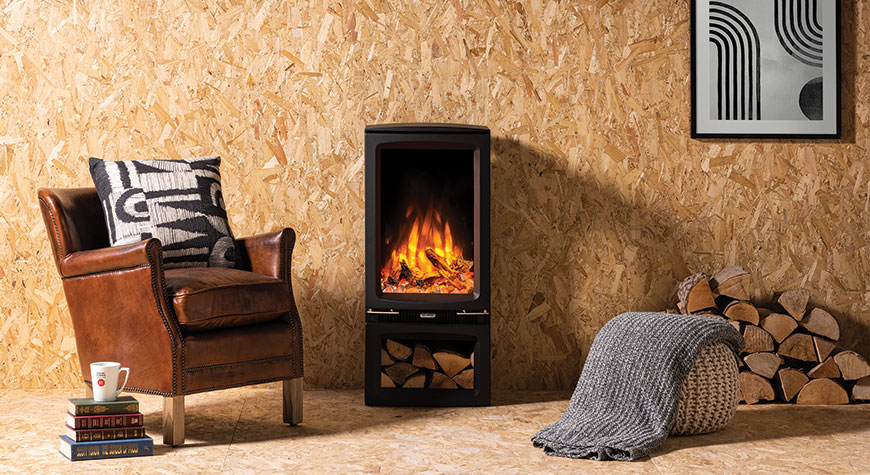 Well, it goes without saying but as long as there is an electric supply available, then of course you could consider installing an electric stove or fire in a shed or outbuilding. As with any installation there are a couple of considerations to take into account before doing so. Check out our other blog post to find out what those are.

We hope this article has allowed you to explore some of the benefits of electric stoves and fires. If you’ve been inspired, you can speak to your nearest retailer to learn more. 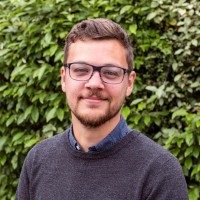